Deferiprone (3-hydroxy-1,2-dimethylpyridin-4-one) is an iron-chelating agent that is synthetic and can be consumed orally. It belongs to the category of compounds known as 4-pyridones and has the structure of a pyridin-4(1H)-one that has methyl groups attached to positions 1 and 2 and a hydroxyl group attached to position 3. It is a crystalline powder that ranges in color from white to pinkish-white. It’s solubility in deionized water is low and has a melting point ranging anywhere from 272 to 278 degrees celsius.

It is used to treat the patients having transfusional iron overload. Patients with thalassemia, sickle cell disease or anemia are prescribed with Deferiprone to remove the excess iron from the body. It works by inhibiting a rate limiting enzyme in DNA synthesis- the intracellular ribonucleotide reductase. 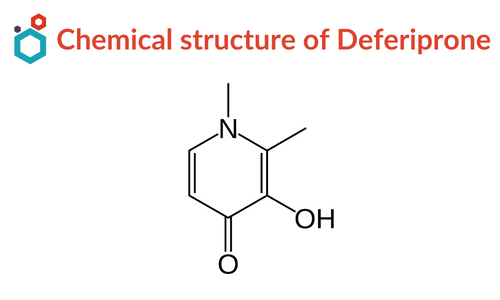 In 1981, Deferiprone was originally designed and screened in vitro and in vivo by Kontoghiorghes G. J. The safety and efficacy of deferiprone is based on an examination of twelve clinical investigations involving 236 individuals. Initially the journey of deferiprone was a difficult one in the treatment of thalassemia but after many complications and the usage of suboptimal dose, the aim of the drug to remove the excessive iron in thalassemia patients was achieved.

It was first approved and indicated for use in treating thalassaemia major in 1994. It was approved for medical use in the European Union in August 1999 and in the United States in October 2011. In August of 2019, approval was granted for generic versions. Deferiprone is a chelating agent that has a high affinity to ferric ion (iron III). It binds to ferric ions (iron III) and forms a stable and neutral 3:1  complex with the iron, which is excreted in the urine. That is why, the use of Deferiprone is commonly associated with orange discoloration of the urine. The red-brown urine actually is an indication of iron being removed through the urine.

The deferiprone molecule has a greater affinity for iron than for other metals such as zinc, copper, and aluminum.

Numerous individuals with Thalassemia, Sickle cell disease (SCD) or other anemias require chronic blood transfusions, which frequently results in iron overload necessitating chelation therapy. Blood transfusions aid in the treatment of blood diseases, but they also introduce excess iron into the body. It is critical to eliminate excess iron since high amounts of iron can create health concerns such as heart failure, liver disease, diabetes, and delayed growth in children.

When standard chelation therapy is insufficient to treat individuals with transfusional iron overload caused by thalassemia syndromes, deferiprone tablet is recommended as an alternative treatment option in adult and pediatric patients 8 years of age and older.

It may also be utilized to remove excess iron from the bodies of adults and children older than three years of age in the form of an oral solution in patients suffering from sickle cell disease (a form of inherited blood disease) or other forms of anemia.

Both tablet (500 mg and 1000 mg) and an oral solution (liquid) form (40g/400mL or  20g/250mL, having strength of 80 mg/mL and 50g/500mL, having strength of 100mg/mL) of deferiprone are available for oral administration. It is recommended to take this medication two or three times per day. One can take deferiprone with or without food, but taking with food assists in reducing the risk of experiencing nausea and vomiting as a side effect of the medicine.

The dosage recommended for the patients with transfusional iron overload varies with age and weight. It is taken in oral form and the starting dosage is 25mg/kg, thrice a day. It is recommended according to the body weight like 20kg person can have 500mg i.e., 1 tablet, 30 kg person can have 750mg i.e.,1.5 number of tablet . 250mg dose increases with every 10kg.

Some unwanted effects can be commonly observed with this medicine, varying from person to person. The following list contains the side effects that are most frequently associated with the use of deferiprone:

The adverse effects that are clinically significant are as follows:

Comparison with other compounds

Q. How often do you take Deferiprone?

Deferiprone is given in two different forms:

Q. How is Deferiprone excreted?

Macsen Labs is a GMP and ISO-certified manufacturer and supplier of high-quality Deferiprone.

Q. How much iron does deferiprone remove?

The efficacy of deferiprone is associated with a decrease in iron content of about 24.9% in the liver, but an increase in liver weight and water content.

Ferriprox, which is the brand name of the medication deferiprone, has received approval from the FDA, for the treatment of thalassemia, iron overload, and sickle cell anemia.

The information provided here is based on general knowledge, articles, research publications etc. and we do not claim the authenticity of any of the information provided above. We do not claim or suggest/advise any medical, therapeutic, health or nutritional benefits of Deferiprone. We do not supply or promote our Deferiprone product for the applications which are covered by valid patents and which are not approved by the FDA.

Macsen Labs is a manufacturer and supplier of high-quality Deferiprone.