What is Cromolyn sodium?

In this article, you will get to know everything about cromolyn sodium. 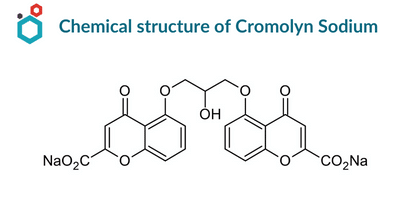 Cromolyn sodium inhibits the release of inflammatory mediators like histamine and leukotrienes from the sensitized mast cells causing allergies. It basically works at the surface blocking the degranulation that further expands the allergies. It is different from antihistamine medications in reducing the action of histamines released from the mast cells. Cromolyn sodium hinders immediate and late reactions. Its use has been mainly related to flushing, headaches, vomiting, nausea, etc. Pharmacokinetics refers to the movement and modification of the drug inside the body which comprises of 4 major phases-absorption, distribution, metabolism & excretion. The key components related to Cromolyn Sodium’s pharmacokinetics are-

Cromolyn sodium is a medication that prevents the release of substances that cause inflammation and swelling in the nasal airways. It is thus used to manage bronchial asthma, allergic rhinitis, and certain allergic eye conditions such as vernal conjunctivitis, keratitis, and keratoconjunctivitis. It prevents and treats stuffy and runny nose, sneezing, and other allergy symptoms. It is also used to treat allergic dermatitis, which can cause eczema on the skin.

It is also used for the treatment of Mastocytosis that usually occurs with the accumulation of too many mast cells. The major release of the mast cells causes the skin and gut problems. Cromolyn stabilizes the mast cells.

Additionally, a study is also being going on in the US regarding the use of Cromolyn sodium for treatment of COVID-19 pneumonia. The study is based on the hypothesis that cromolyn, when combined with standard COVID-19 treatment, will improve patient symptoms and lead to faster recovery with improved quality of life. How to use Cromolyn sodium

Cromolyn comes in the solution form with a special nasal applicator. According to the symptoms, it is usually inhaled 3-6 times. It works best if used before you come in contact with an allergic substance. For seasonal allergies, it is advised to take regularly till the season changes.

The exact dosage can only be told by the doctor or the pharmacist. 4 weeks is the minimum time for cromolyn to work; later if the condition does not improve, then contact your doctor.

In case of ampoules, swallowing an ampoule is not recommended, the content it contains is used in making a solution. Break the ampoule and squeeze in the glass of water, stir it well and drink it right away.

Some necessary precautions must be taken. Precaution is always better than cure. Caution is necessary to be followed in the patients with a history of liver, kidney disease, pregnancy, or any other allergies record.

Some extra warnings include:

There are some additional or unwanted effects that you might face with the medicine. It is not necessary that it will happen with everyone, but if in case any of these effects are visible and are bothering you, then you must seek medical assistance.

Common side effects associated with the use of Cromolyn Sodium are –

Some serious side effects include-

Q. Can cromolyn sodium be a substitute for a prednisone?

Cromolyn sodium cannot be used as a substitute for prednisone.

It is not a necessary side effect noted. However, during the treatment, some weight loss might be observed and you may gain back what you have lost. This is the reason why a possible weight gain might be observed.

Q. Is cromolyn sodium an antihistamine?

Cromolyn sodium differs from antihistamine which works by reducing the action of histamine.

Q. Is cromolyn sodium a steroid?

It is not a steroid, as steroids inhibit late response whereas cromolyn sodium inhibits the immediate and late reaction in case of allergies.

Q. What is the minimum time for cromolyn sodium to work?

Oral administration of this medication results in poor absorption of the medicine, and the onset of its effects might take from two to six weeks.

Cromolyn Sodium preparations are non-addictive, people can use them easily for 12 weeks daily.

Q. Is there any difference between cromolyn and other anti-asthma medications?

It is the only anti-asthmatic that blocks both early and late asthmatic responses in response to allergen inhalation and exercise, so it is used to treat mild to moderate bronchial asthma.

Cromolyn sodium is only available on the doctor’s prescription and not an over-the-counter drug.

The information provided here is based on general knowledge, articles, research publications etc. and we do not claim the authenticity of any of the information provided above. We do not claim or suggest/advise any medical, therapeutic, health or nutritional benefits of Cromolyn sodium. We do not supply or promote our Cromolyn sodium product for the applications which are covered by valid patents and which are not approved by the FDA.

Macsen Labs is a manufacturer and supplier of high-quality Cromolyn sodium.