Proflavine Hemisulphate, also known as proflavin or diaminoacridine, is an acriflavine derivative that works as a disinfectant and bacteriostat against gram-positive bacteria. It was previously used as a urinary antiseptic and has been used as a topical antiseptic in the form of dihydrochloride and hemisulfate salts for treating superficial wounds.

Proflavine Hemisulphate API solution is used as a fluorescence contrast agent used in high-resolution optical imaging devices like the high-resolution microendoscope to visualize cell nuclei. These devices use real-time imaging to differentiate between normal and cancerous tissue. These images may be useful for the early detection of oral cancer and its precursors, as well as for determining precise malignant tissue margins for ablative surgery. To improve compounding efficiency in the pharmacy, extemporaneous preparation of proflavine solution for these diagnostic procedures requires batch preparation and long-term storage. Long-term stability data for proflavine contrast solutions, on the other hand, is scarce.

Proflavine is also known to cause DNA mutations by intercalating between nucleotide base pairs. It differs from the majority of other mutagenic components in that it causes basepair deletions or insertions rather than substitutions. Proflavine can cause double-stranded breaks in DNA when exposed to light. 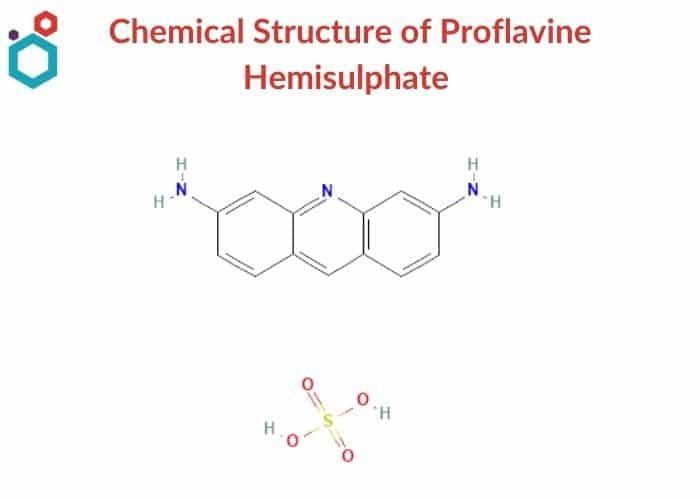 Proflavine has been found to possess carcinogenic properties, due to its mutation causing nature. There are no side effects reported from this compound yet.

Q. Where is Proflavine found?

Proflavine is only found in people who have used or taken this medication.

Q. What is the storage condition of Proflavine?

Q. Is Proflavine a mutagen?

Proflavin is known to have a mutagenic effect on DNA and causes basepair-deletions/basepair-insertions rather than substitutions. It can also induce double-stranded breaks in DNA in the presence of light.

The information provided here is based on general knowledge, articles, research publications etc and we do not claim the authenticity of any of the information provided above. We do not claim or suggest/advise any medical, therapeutic, health or nutritional benefits of Proflavine Hemisulphate. We do not supply or promote our Proflavine Hemisulphate product for the applications which are covered by valid patents and which are not approved by the FDA.

Macsen Labs is a manufacturer and supplier of several grades of Proflavine Hemisulphate such as:-